I had posted this piece from Granma Eng. in the Cuba thread the other day but it bears repeating, applying to us all.


The art of media warfare

We must ensure that any coup attempt, destabilizing, demoralizing or manipulative action - economic, military or financial - financed by the CIA or its planetary network of accomplices, is immediately reversed and returns to them like a boomerang that explodes in their faces

Let us put the dispute for meaning on the agenda of all our struggles. We must go deeper in the grassroots debate about its means and ways, the agenda of the communicational war (monopolistic and global) but we must develop methods of deepening and argumentation far removed from the hegemonic logic and pedagogy infiltrated in what we understand by communication and by war. It is neither about communication in its generic bourgeois use (almost platonic), nor is it about conventional war. This is where the challenge begins.

In more than one sense, the first skirmishes of a semiotic guerrilla war must take place in our own heads. It is necessary to extract the bourgeois ideological devices that force us to think about communication as it suits the enemy. We must rid ourselves of the ideological subtleties of foolish skepticism - and Superman individualism - from which no one is safe (with due exceptions), given that the vast majority of us have lived exposed, 24 hours a day and for decades, to radiation from the bourgeois ideological Chernobyl in the mass media.

We must get out of our heads any petulance that leads us to believe that we know it all, and that we are common sense experts in media management. This has produced an untold amount of confusion, chaos and wasted time, as a result of the assumption that there are geniuses who are naturals in manipulating the masses. Betting on the charisma formula in addressing the multitudes. A messianic ideology.

Neither its logic, or its aesthetics, can be imitated. It cannot be assumed that by copying their artifices, we will achieve the successes they have. The key lies not in copying them but in fighting them, defeating them from the very heart of their semantic, syntactic and pragmatic contradictions, with our feet planted firmly in the soul of the class struggle and concrete battles, where these are manifested most sharply. They attack us with seductions of all kinds; they attack us with argumentative missiles disguised as slogans; they attack us with enormous repertoires of temptations and luxuries under the cloak of an ideologized aesthetic around commodities and the accumulation of wealth at any cost. Their technological and ideological arsenal has created the semantic spheres of consumption, and moreover, as they attack us by seducing us, they strengthen their arsenals and their fields of meaning, which are nothing more than concentration camps full of kidnapped consciences.

Our social bases need a methodology for self-criticism. There is an urgent need for a deep, decisive assessment of the consequences of the media violence suffered by our peoples. We need a map, or an x-ray of the disaster, reproduced with all subjectivities. We urgently need a thorough effort to evaluate and systematize the keys to our great semiotic victories, from the October Revolution to the present day. This should be a new Universal Charter for the media and cultural emancipation of our peoples, but we need resolute organization and coordination to close the path to the imperial arsenal which is systematically updated to attack more ubiquitously and rapidly. We need tactics and strategies to respond, in real time, to the offensives, but with our own theoretical-practical tools for revolutionary symbolic planning.

If we only produce lamentations (however scientifically based), we are only producing reports on our casualties, losses and setbacks, which the class enemy values highly. We do the work for them of explaining how they harm us. We urgently need a "What is to be done?" in terms of concrete answers for the short, medium and long term. We need the inter, multi- and trans-disciplinary participation of all experts committed to emancipation and ending capitalism. Talented specialists in the struggle against symbolic manipulation and creative forces in the sciences and the arts.

We must ensure that every coup attempt, destabilizing, demoralizing or manipulative action (economic, military or financial) financed by the CIA or its planetary network of accomplices, is immediately reversed and returns to them like a boomerang that explodes in their faces. We need vaccines against bourgeois ideological viruses, and we need a method of symbolic production that advances in the territory of critical, emancipatory, anti-imperialist and anti-capitalist thought. "Fighting Capital", as the Peronist hymn advocates, for example, and as the entire history of the Greater Homeland demands. There is no time to lose. The art of media warfare must be re-conceptualized, rewritten and consolidated as a new and central instrument for the democratization of information and communication. Or we will continue facing the dangers and paying a very high price in the form of absolutely unjust consequences.

"There is great chaos under heaven; the situation is excellent."
Top

Reporters Without Boarders (RSF) led the campaign together with PEN, Amnesty International and a Germany journalist union. They called for an hour long tweet storm to demand of that German politicians should act to get the Chinese 'journalist' Zhang Zhan released from prison in China. 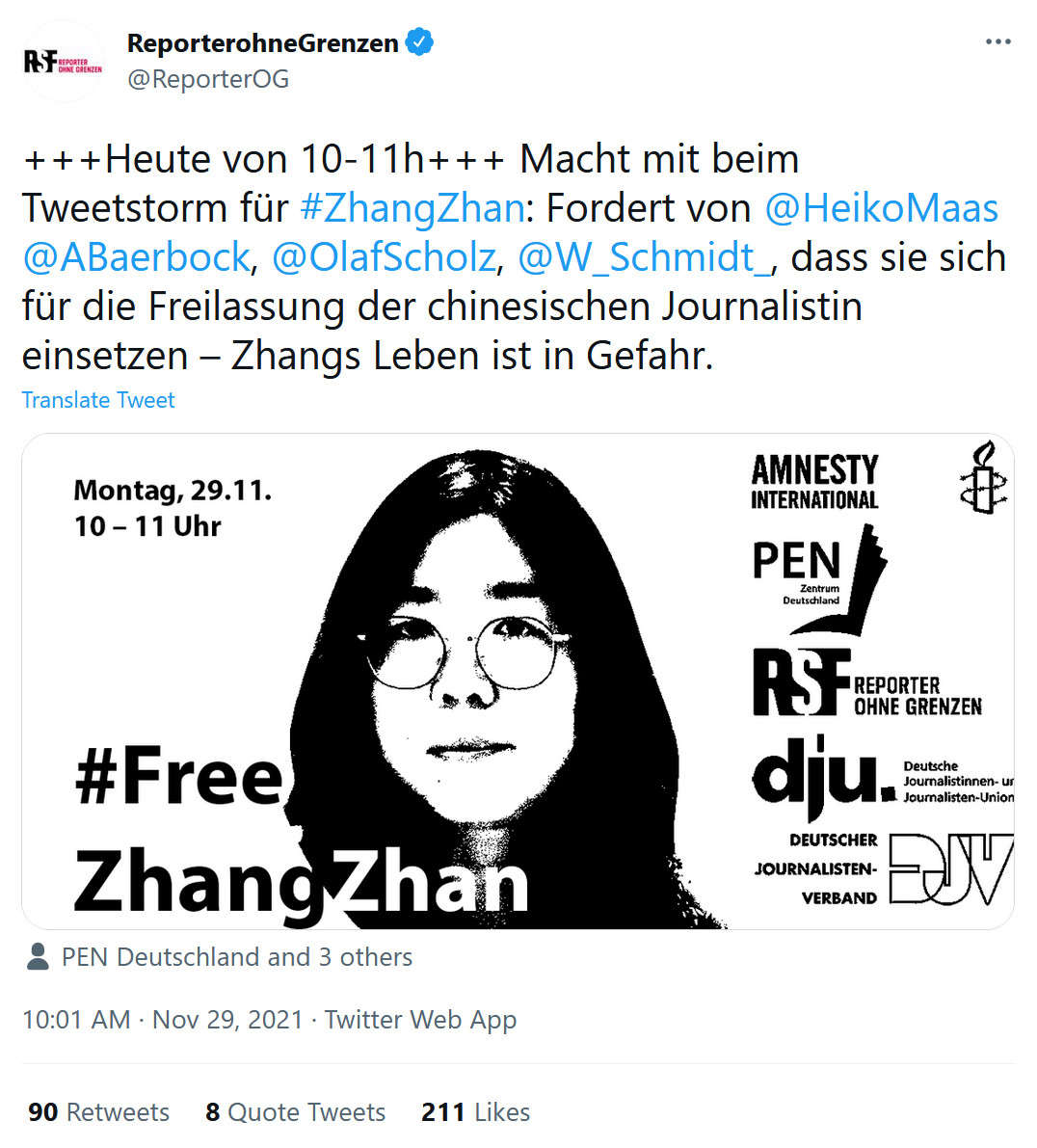 The campaign was somewhat successful. A search for the #ZhangZhan hashtag used show that a lot of ill informed people, including many journalists, tweeted or retweeted the issue. The misinformation spread by Robin Alexander in the above tweet is pretty heavy but not unusual.

Zhang Zhan is not a journalist. She was not one of the first to post video from Wuhan. She did not report on the COVID-19 but protested against the successful lockdown. She is not in jail for that reason.

The German news sites Süddeutsche Zeitung and Spiegel report about the RSF campaign. Those news reports are even worse than the re-tweets. The Spiegel, for example, claims that Zhang Zhan was 'tortured and imprisoned for her reporting of the Chinese government's bad handling of the plague.'

Germany has exceeded 100,000 deaths from Covid and is currently in a record breaking 4th wave. China has had less than 5,000 death and is free of Covid. Given that it seems pretty lunatic to me to accuse China of a 'bad handling of the plague'. Also - to my knowledge no 'torture' has ever been alleged to have happened in the Zhang Zhan case. The Spiegel made that up.

We looked at the Zhang Zhan case in December 2020 when the 'mighty Wurlitzer' played her song simultaneously in many major media including the BBC, New York Times, Washington Post, Reuters, CBSnews and Sky.

The Trump loving anti-China Epoch Times subtitled the video Zhang Zhan had made when she, in early February of 2020, went from Shanghai to Wuhun which was under strict but successful lockdown. It also described and translated it:

Location: Wuhan City, Hubei Province
Zhang Zhan, a female dissident living in Shanghai, put herself in harm’s way to go to Wuhan after the city was locked down. Her plan was to investigate and broadcast the local situation as a citizen journalist. She is outraged that the Chinese government casually deprives the basic rights and freedom of Wuhan residents in the name of epidemic control.

Woman: Let me ask you,
Do you think the government can treat citizens like animals?
Lock them when the regime is willing to,
Send them out to work when they need these people to work.
Aren’t you treating them like you treat cattle and horses?
When animals need to graze you let them out
And take them back when they are done eating.
Is that for real?
And if they do not obey, whip them.
Is that how it should be?
Is it justified to treat civilians like this?

Man: What are you doing?

Woman: I want to express my protest against the government, persistent protest.

Immediately before the man asked 'what are you doing' Zhang Zhan is seen in the video intentionally knocking over a traffic barrier at a health checkpoint.

Zhang Zhan was not 'reporting'. She was, in her own words, expressing persistent protest against the government. She did so while filming that protest to then upload it on Youtube and Twitter (both of which are blocked in China).

Zhang Zhan was not arrested at that time though she probably should have been. In a different piece the Epoch Times explains:

On May 13, Zhang posted a YouTube video in which she spoke in front of the Hankou Railway Station in Wuhan. In the video, she criticized the local government’s plan to roll out virus testing at $180 yuan (about $25) per person as too high a price, noting that locals had been under lockdown for months.
She added that while human rights have been trampled during the outbreak, people would likely be willing to foot the bill in hopes of proving they were virus free. In order to pass security checkpoints in many cities, citizens must present a mobile-app-generated code that proves they are virus-free.

She also called out intimidation tactics adopted by Wuhan authorities to try to control the spread of the virus, saying they were a “sorrow of the country.”

A day later, she went missing.

All testing in China during the various outbreaks has been free of charge. In mid May there was a small new outbreak in Wuhan with a total of six cases of Covid-19 identified. Zhang Zhan was quoted at that time on the CIA's Radio Free Asia website with the false claim that 'There are signs of a resurgence of the epidemic in Wuhan.'

Zhang Zhan was arrested in May 2020 for spreading fake news about a government test-for-money plan that did not exist and other false Covid claims she had made. It was not the first time that Zhang Zhan had got herself into trouble. She had a short stint in prison in late 2019 also under the charge of 'picking quarrels and provoking trouble', a law that covers spreading fakenews on the Internet.

The South China Morning Post reported that, while in jail, Zhang Zhan went on 'intermitted hunger strike' (whatever that may mean). In December 2020 she was sentenced to four years in prison:

The sentence was in response to reports that she live-streamed from Wuhan on social media platforms, including Twitter and YouTube, which are both blocked in China.

She also wrote an article critical of the official response to the outbreak, accusing authorities of infringing people’s rights and covering up the severity of the epidemic.

Her coverage was deemed “maliciously fabricated content and false information” and she became the first so-called citizen journalist tried by a Chinese court for reporting on the coronavirus outbreaks in the city.

The World Health Organization has warned of the danger of false information during a pandemic:

An infodemic can have direct negative impacts on the health of populations and the public health response by undermining the trust in science and interventions. We are also seeing that infodemics hinder the cohesiveness of societies by increasing existing social inequities, stigma, gender disparity and generational rift.

The WHO called on governments to take 'measures to counter misinformation and disinformation'.

China did that when it finally arrested Zhang Zhan and put the repeating offender into prison.

Zhang Zhan is a 'dissident' who has protested against the sensible epidemic measures the Chinese government took to defeat the pandemic within its country. The 'former Christian lawyer' Zhang Zha has similar radical libertarian opinions about pandemic measures as the 'Querdenker' (lit. 'lateral thinkers') in Germany who protest against wearing masks and lockdowns and the various Covid deniers and radical anti-vaxers elsewhere.

RSF has just awarded Zhang Zha, among others, its Press Freedom Award 2021.

That RSF, Amnesty, Pen and the DJU support her cause says a lot about those organizations' lack of integrity.

https://www.moonofalabama.org/2021/11/g ... .html#more
"There is great chaos under heaven; the situation is excellent."
Top
Post Reply
192 posts