News Point .The Government of President Lenín Moreno has shown a close and cordial relationship with the country's mainstream media, hence they have not exercised a critical line towards the regime.

An element that adds to that close press-government relationship is the appointment of journalists or their families in diplomatic positions abroad, as part of the political quota.

According to official information from the Ministry of Foreign Affairs, Christian Bernardo Oquendo Sánchez, son of the owner of Radio Vision of Quito, Diego Oquendo, serves as Second Secretary of the Embassy of Ecuador in Canada, with a unified compensation of USD 5,508. Oquendo Sánchez is an anthropologist and social communicator.

In the list is Pablo Esteban Ortiz García, former Teleamazonas lawyer and brother of journalist Jorge Ortiz, who serves as Ecuador's ambassador to Belgium, with unified income of USD 10,527.

Another case is that of Luis Eduardo Khalifé Moraga, former Secretary of Communication and former interviewer of Ecuador TV, who occupies, with the rank of ambassador, the representation of Ecuador before Unesco, in France, with a remuneration of USD 10,579.

Another former television figure who occupies a diplomatic position is the former presenter of TC Televisión, Martha Agustina Sandoval Riofrío, who serves as general consul in Malaga, Spain, with a salary of USD 6,091.

The journalist and former editor of Diario El Comercio, Ivonne Eulalia Guzmán Vera, integrates Ecuador's diplomatic mission in the United States, as consul general in Los Angeles, and receives a fee of USD 10,092.

These and other commitments with the media would guarantee President Moreno, at least for now, that the press is not very critical of political and economic decisions undertaken by the regime.

A clear example was when the media defended the elimination of fuel subsidies, decreed by the Head of State, and which was subsequently repealed after the October strike last year.

In the demonstrations the departure of the chief of police, Mario Rozas, was requested after the complaints against the security body for violation of human rights | Photo: Reuters

Although the demonstrations have decreased in January and February of this year, on Fridays for four months, hundreds of people take to the streets of Santiago to protest.

A new peaceful protest against the government of President Sebastián Piñera was recorded the day before in Santiago, the Chilean capital, which was repressed by police, while there was a fire in the vicinity of the "Plaza de la Dignidad".

The Plaza Italia, renamed "Plaza de la Dignidad" by protesters, a usual protest area in Santiago, gathered thousands of people with flags and canvases in a peaceful demonstration that contrasted with the incidents that occurred in adjacent streets and the intervention of the public force

Although the demonstrations have decreased in January and February of this year, on Fridays for four months, hundreds of people take to the streets to protest.

During the day there were some fires in the streets surrounding the square; one of the most notorious happened after dozens of hooded people set fire to the cabin of a truck that was built against a tree.

Hours later, a house fire was recorded, which is used by students, in Vicuña Mackenna and Carabineros de Chile, very close to Plaza Italia.

The protesters had placed barriers in some streets of the capita, but were repressed by elements of police, which used water-throwing cars.

The mobilizations in the sector again affected the train flow of the Santiago Metro, as several stations on line 1 were operating partially.


On this new day of marches the departure of the chief of police, Mario Rozas, after repeated complaints against the security body for human rights violations.

The concentration, which took place mostly in a peaceful and festive atmosphere, was convened through social networks under the motto "A Valentine without Rozas" and dozens of protesters came with posters alluding to the appointment.

In videos broadcast by the Think Press site, the moment when protesters are attacked with tear gas bombs thrown by police. In response, some people threw them back to the uniformed.

For the month of March, the Chilean population fears that violence by Carabineros is revived with dozens of marches that have already been announced in social networks against the government of President Piñera.

In the next few days the International Song Festival of Viña del Mar is celebrated, which coincides with the end of the summer period and the return to classes.

Sebastián Piñera's approval reaches a minimum of 9% in Chile 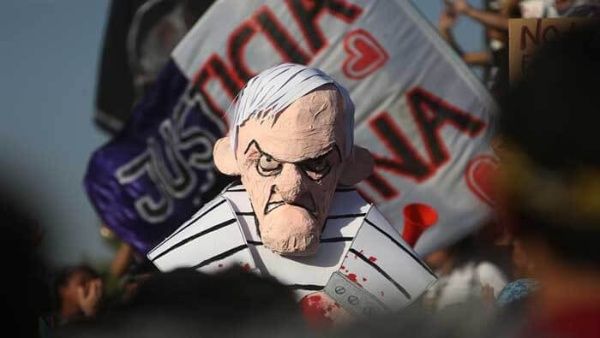 Respondents also expressed their opinion about the police (military police), who only have 34 percent support for their management. | Photo: EFE
Posted 10 February 2020

According to the data collected by the pollster, the disapproval of Chilean President Sebastián Piñera was recorded at 84 percent.

The president of Chile , Sebastián Piñera , reached a minimum approval of 9 percent, according to the survey published Monday by Cadem Public Square.

According to the data collected, the disapproval of the Chilean president was recorded at 84 percent, an assessment that has remained high since the social outbreak against his Government last October.

Likewise, those who participated in the survey expressed only 34 percent support for the management of the police (military police), a historical decrease, who have been denounced for committing human rights violations during the demonstrations.

Regarding the economic situation in the country, the survey showed that it is an issue that still worries the population, because only 13 percent have expectations that it will improve, 43 percent believe it will remain the same and that same percentage of people He thinks it will get worse.

Despite strong repressions by state agents against anti-government protests, in which thousands of people have been injured and hundreds with eye injuries, the rejection of Piñera has been maintained since October 2019, reiterating the request for his resignation.

In the Chilean revolt, the best is yet to come

They have not been able to with this stubborn and brave people that for four months they have not only gone out to the squares for thousands, but they have changed their name to beautiful words such as "Dignity" and "Revolution." He has thrown down monuments of conquerors and vendepatrias, disciples of those, has suffered wounds in the eyes of many young people who had opened large, very large, to face their enemies, have added thousands of rebels in prisons and has even raged with pain by the companions killed by those criminals in uniform, pinochetista, who are the Chilean police. Or rather, the "pacos qliaos," as they shout at each crowd meeting. 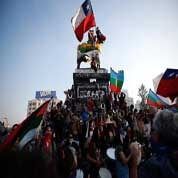 But the evidence shows that that dictator Sebastián Piñera and his companion of ministers, ministers and jesters, are increasingly surrounded by the anger of those who despise them for becoming ruthless and corrupt figures of a system that is falling apart, and that for Preventing the fall is able to kill these people in a thousand ways. By hunger, by misery or clean shot. Isn't it true, General Rozas?

The same applies to that bourgeois party, from the right or from the "left." The first, because as Piñera they are "murderers just like PInochet", and the second because they were the main supporters of capitalist governments and repressors (against the Mapuche people, the students and the workers) during the Concertación de Lagos or Bachelet. They are the same ones that now agreed with Piñera a constituent plebiscite empty of content, and not the one that those who fight on the front line against oppression every day want. Although they carry out that hoax everything indicates that they are doomed to failure, since the rebellion is difficult to cease.

Four months are not a few to continue fighting the repressive madness of the pacos, no matter how much some bullies continue to announce, as crows, that "it is soon over." They were wrong and they will be wrong again. Chile woke up and all fears were lost. What would be the point of giving up the freedom of the streets with thousands of young people singing, dancing, fighting and answering whoever asks them, who do it for "dignity." But also for the other or the other, for the old men with rubbish retirement, for that student who lived Violeta, who resisted as he could but prevented the PSU filter from leading them ahead By today's 3000 prisoners and prisoners, which are very similar to those who imprisoned the Pinochet dictatorship in the Stadium. By Commander Ramiro, buried in life in a terror prison and by Mauricio Fredes or Neko Mora, of the Colo Colo fans, killed by the damned carabinera repression. And undoubtedly, by Víctor Jara, from whom they sing some of their emblematic songs in the middle of the barricade in the Alameda, as well as enjoying the peleona coherence of the rapper Anita Tijoux or the Bersuit, which this Friday will play from the Plaza radio balconies of Dignity

All these stories and experiences embodied in a wonderful youth were reinstated on Tuesday in the Plaza of Santiago, in Valparaiso, Antofagasta and other answering spaces. As always the repression believed that they dispersed them intoxicating the air with their poison, but in their cowardice they do not understand that this Revolt is unstoppable and by reoccupying their trenches, with smiles, improvised rhythms, cacerolazos and drums, they are showing the world that four Months are nothing. Moreover, they serve to presage that a "combative March" comes with everything.

Google Translator
"We ask no compassion from you. When our turn comes, we shall not make excuses for the terror."
Top
Post Reply
43 posts